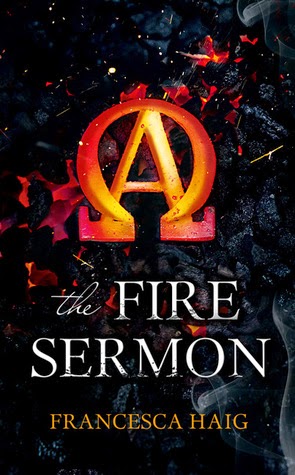 When I first heard about The Fire Sermon I was so excited. Because this book sounds all kinds of amazing. And he cover is pretty gorgeous too. So I was so happy and excited when I was offered to get a review copy from the UK publisher, HarperVoyager. It arrived, and I peeked, but then put it on hold for months. Ack.

But now I couldn't wait any longer to read it, since it will be published in just over a month. I knew some things about the ending would bother me, but I hoped the rest of the book would be amazing, since the plot sounded so good. But oh. I was wrong. I had so many issues with this book. And that makes me so sad.

I will try my best not to post spoilers for this book, though I will share some plot details, as I have to talk about the things I did not like in this book. Sigh. But I also want to talk about what I could have liked. Why this is a two star rating and not a one star. Because I did like some things. But then there were the things I didn't like. Sigh. First, I thought this book would be young adult. It seemed that way. And in the beginning of the book, the girl, Cassandra, is nineteen years old. But then she is kept in a cell for four years. Which makes her twenty three. And then more months pass, so I'm starting to think she's twenty four by the end of the book. Which, I must be honest, bothered me. I thought she would be younger. And she acts so much younger.

I wish I could say I loved Cass. But I didn't. Because the writing is all kinds of awful. I could not like it. It isn't the worst, but I never connected to her. And, this book isn't personal. Not at all. I barely knew anything about Cass. Like, after she has spent four years locked up, never seeing herself, she wonders for one moment, while lying next to a naked man, what her breasts looks like. What the hell. But then we never get to witness her looking in a mirror. So I have no idea what she looks like. It bothered me.

But the plot. I really wanted to love the plot in this book. And I did, honest. Because I was so curious about the twin thing. How everyone born is a twin, one girl, one boy. One of them perfect, the Alpha. One of them damaged, the Omega. How the Alpha's are in charge, and the Omega twins get sent away and have to live poor. It was such an interesting plot choice. But we barely see any of it. And that hurt my heart, because I wanted so much more from this plot. With it being four hundred years in the future.

I wanted more from this plot. Instead I got a whole bunch of Cass thinking about the past. Thinking about all the damn details I couldn't care less about. There is not much happening in this book. There is a lot of pages being on the run. And it was so boring. Seriously boring. But I liked getting to read a little bit about Cassandra and when she lived with her twin, Zack. Though it was written so badly. The way time was written didn't work. It felt so messy. It didn't make sense. And I noticed it so often. Sad face.

But back to Cass and Zack. I liked reading about them when they lived together, until she was thirteen, and was marked as an Omega. Which should have happened when she was a baby, but she was never deformed, as she is a seer. And oh. I hated how her seer powers kept changing. As if the new way it worked was usual, when it wasn't. But then Zack suddenly gets super powerful, and knows so much, and he gets Cass thrown in a cell. Where she is for four years. Just didn't see the point of all those years.

Oh, and then she is so smart and suddenly escapes, which I didn't understand how it was possible, but she managed it. Where she found a naked man/boy in a tank. Which she freed. And took with her on the run. My god. I did not like this man. She names him Kip, as he remembers nothing of his life. And then they are on the run for months. It was so boring. And I suppose there is a small romance between them, but it is done so badly. I never once felt or saw the point of it. Not at all. Didn't like it. Sigh.

I won't say too much more about the story, but some things. Maybe. There are more characters in this book. Like Piper. Whom also suddenly seems to be in love with the girl. But there isn't a love triangle. I wouldn't even say there is a love story at all, with how bad it is written. Cass and Kip kiss. They probably sleep together too, but it is never said. That bothered me a whole damn lot. Anyway. Piper. He was an interesting character, but I didn't love him either. He seemed to like Cass more than she deserved.

Another thing I haven't mentioned. I know it may be silly of me, but I really, really disliked that Kip was missing an arm. It would bother me so much in real life. How he cannot do things. Or hug her. Or anything. But then Piper is missing an arm too. And it got way too silly for me. I couldn't love any of the characters in this book. I tried. But there is no feelings for anyone. They are written so badly. Well, maybe just how Cass sees things is so badly. But even she is written badly. Mostly, I hated the writing.

I don't want to talk much more about this. I am so disappointed by The Fire Sermon. I wanted it to be amazing. But it wasn't. It let me down. And I'm sad about it. But I'm giving it a two star, because I did like the plot. And I do want to know what happens next. I'm curious. Huge thank you to HarperVoyager UK for being so kind to send me a print ARC of this book. <3 I will treasure it, because it is gorgeous. I'm just so sorry that I couldn't love this book. But yeah. The Fire Sermon was not for me. Not at all.