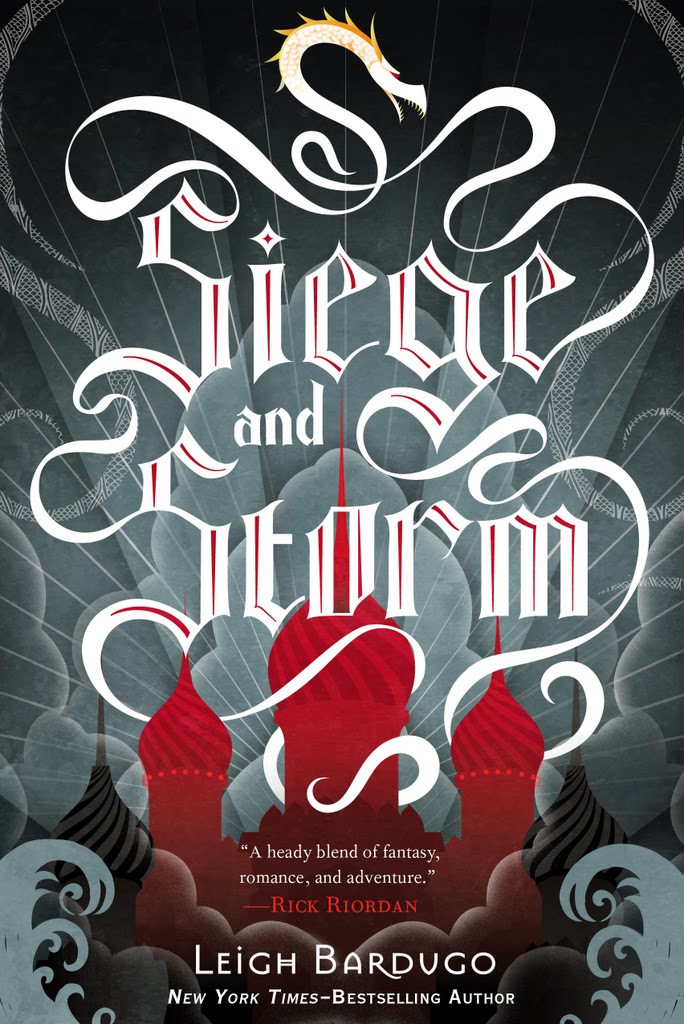 I was finally brave enough to re-read Siege and Storm. And I'm happy I did. But I'm also feeling so much more heartbroken about it. Just thinking about it makes me want to cry. But it is also such an amazing book. And I'm going to try to not focus on the heartbreaking parts. I will try to forget all about them, and hope that Ruin and Rising will make it all better. <3 Hopefully. I'm going to try. Probably. But either way. I'm glad I re-read Siege and Storm and I will try to talk a bit about my complicated feelings for it :)

Though I am not sure where to start. I'm not sure what I should mention and what I shouldn't mention. There is so much I want to talk about, but most of that is pretty spoilery and mostly about Mal. But a few things must be mentioned, still. But first I should say that I loved Siege and Storm. The writing was even better in this book. And I love the story and plot so much. I love reading about the Grisha. All the things they do. It's amazing and unique and I just want to read about it all the time. It's so so good.

There is a lot of things happening in Siege and Storm. I loved the beginning, the middle and the end. I loved all of it. But the beginning a little bit more. With Mal and Alina on the run. <3 Though that did not last long. Sniffs. We see more of the Darkling in this book. Though not too much, thank god, lol. I still don't like him. He's a great villain, though. And he does so much more awful things in this book. And I could never love him. Which I love, hih. He creates some new creatures. And they creeped me out.

I'm not sure what to talk about. I won't mention too much about the plot, as I don't want to spoil everything. So I'm going to mention a few characters. I loved Mal in this book. So much. Though he did break my heart. Sniffs. But I will forever ship him. We see more of Genya. And that scene at the end broke me. Yet so damn amazing. I really loved that part. Then there is new character, Sturmhond. Whom I did not love. I liked him, but hated that he liked Alina. Sniffs. But he was pretty awesome, still :)

This book just broke my heart so much. And I'm not sure how to deal with it. Most of it just hurt my heart. But I also enjoyed this book a lot. And I always wanted to know what would happen next. And now that I re-read this book, I had more hope about the ending. Some parts gave me hope. But other parts broke my heart all over again. Sigh. There was just too much. And I will try to talk a little bit about it, but not too much, as I'm not sure I would be able to stop once I get started. And it hurts too much.

What hurt me in Siege and Storm was Mal. Though Mal didn't really do anything that made my heart hurt. Alina did. She and Mal is drifting apart in this book and it's pretty painful. So many awful things happen. And to me, Alina was the fault for that. She didn't tell Mal what was happening to her. She didn't try to spend time with him. She didn't talk to him. She didn't try to make things right. And to me, it seemed like she didn't care much about him at all. And that hurt so much because I love Mal to pieces.


“I came here for you. You’re my flag. You’re my nation.
But that doesn’t seem to matter anymore. Do you realize
this is the first time we’ve really been alone in weeks?”

I just wanted this book to be happy. I wanted Mal and Alina to have lots of sweet and happy moments. But they don't. They have a few pretty cute moments in the beginning that I love. But then the last part of the book happens and there is just so much hurt and anger. It still hurts. But oh. I have hope. I need them to fix it. But I fear that Mal will be the only one trying, like always. I want Alina to win Mal back. I want her to want him. I want her to try her best to make him forgive her. It probably won't happen.

But anyway. I won't say more about it. Just that it all broke my heart so much. And I hated it a little bit. But I couldn't hate it too much, because it did make me care. And I kind of loved how it was written. But that doesn't stop me from wishing it hadn't been included. I felt like the book would have been even perfect, with Mal and Alina a couple all the time. Sigh. But I do like a little drama. Probably. I just wish it will get fixed early in Ruin and Rising. If it gets fixed. I'm worried. But I will hope. Fingers crossed. <3

Anyway. Siege and Storm was an awesome book. And I'm so glad that I finally decided to re-read it. <3 It was pretty amazing. Now I'm dying to read Ruin and Rising, though. Just wishing it was out less than four months from now. A bit heartbroken that there will be no arcs. But thinking it will make the wait even better. Just wishing for chapter samples pretty soon. <3 Anyway. If you have read and loved Shadow and Bone then you really, really need to read Siege and Storm. And soon. It's awesome.

His tone was light, but when his lips met mine, there was nothing playful in his kiss.
He tasted of heat and newly ripe pears from the Duke’s garden. I sensed hunger in the hard slant of his mouth, an unfamiliar edge to his need that sent restless sparks burning through me. I came up on my toes, circling my arms around his neck, feeling the length of my body melt into his. He had a soldier’s strength, and I felt it in the hard bands of his arms, the pressure of his fingers as his fist bunched in the silk at the small of my back and he drew me against him. There was something fierce and almost desperate in the way he held me, as if he could not have me close enough.

Shadow and Bone. Siege and Storm. Ruin and Rising.
Leigh Bardugo. The Book Depository.
My blog posts about The Grisha Trilogy.