I'm so happy to be a part of the the Unremembered blog tour! I loved this book. It is pretty amazing. And you all need to read it now that it's out :) My guest post with Jessica is about supporting roles. And it is amazing! I truly love what Jessica wrote for my post. You must read it. It's amazing. Sigh. Also, thanks to Macmillan, there is an US/Canada giveaway at the end of the post :) You want this book.

And the Award for Best Performance in a Supporting Role goes to...

I have Oscar on the brain. And no, sadly, Oscar is not a hot, swoon-worthy love interest in a new YA romance novel (I wish!). But rather the little gold man who stands atop of the most prestigious statue in Hollywood. With the Academy Awards still in our TV rear-view mirrors, I thought it only appropriate that I hold my own little award show here on Carina’s Books. And in honor of Anne Hathaway’s big exciting win, I’ve decided that ALL the awards will be going to…Supporting Roles.

Sometimes readers (and writers) are so focused on the lead characters of the book, we forget about all the great people who are standing behind them, propping them up, making them look good (or bad, depending on the book), and rounding out the story, so I thought it would be fun to dedicate an entire post to the supporting roles of my book. As they played such important parts in the story.

And it seems that all of my supporting characters have a fun “behind the scenes” story associated with them so I thought I would share those as well. So...without further ado, I present three awards for the Best Performances in a Supporting Role:

The award for the “Character Most Determined to Stay in the Book” goes to...

Cody is Seraphina’s socially-awkward 13-year-old foster brother who aides and abeds Sera’s unauthorized field trip to follow a “clue” about her past that leads her 200 miles away from her foster home. He also teaches Sera about every day things (that she strangely has no familiarity with) like cell phones, computers, the internet, and credit cards.

The reason Cody deserves this award is because during a very early revision of the book, my editor strongly suggested I cut him completely from the story. She claimed that he didn’t serve enough of a purpose and kind of “got in the way.” This comment surprised me (and saddened me a little) because Cody was one of my favorite characters to write! He’s moody and sarcastic and totally uncomfortable around Sera who he calls an “amnesiac supermodel.”

I argued that Cody is necessary to the story because he represents an “average teen.” Sera is so far out of the norm (with her exquisite beauty and superhuman skills and complete ignorance of the modern world) I feared that readers would have trouble relating to anyone in the book. So I created Cody to serve that purpose. His reactions, I believe, are similar to how an everyday teen reader might react to someone as “off” as Sera. Plus he’s the comic relief of the story. When anything gets too heavy or serious, Cody can always be counted on to crack a joke and lighten the mood a bit.

Not to mention Cody plays a significantly larger role in book 2...but more on that later (much later.)

In the end, my editor came around to my side. It’s always a little nerve wracking, disagreeing with your editor. But I think we made the right choice. Several readers have already told me how much they love Cody. And while my editor was reading my manuscript for book 2 (which comes out next year), she specifically texted me to say, “Okay, I’m glad we kept him.” :)

The award for the “Character Who Can’t Decide if They’re Male or Female” goes to...

Anyone who’s ever read an “ARC” knows that ARCs are advance, unproofed bound copies of the book that the publisher prints for earlier reviewers which may or may not be full of typos. In fact, the publisher usually slaps a big warning label on the front of the book that alerts people to the fact that there might be glaring typos inside.

Never has that warning been more appropriate than in the case of UNREMEMBERED.

In the beginning there was a character named Maxxer. He was a scientist who Sera meets toward the end of the story, who helps her piece together the final puzzle pieces of the mystery about who she is and where she came from. He was a kind man who sympathized with Sera and her plight and just wanted to help.

This was an excellent point. I had no real reason for making all the scientists in the story men...it just unconsciously turned out that way. But I also didn’t really like that this was the case. So I decided to turn Maxxer into a woman. Instant sex change!

I spent a few days, tweaking the story and the character and of course, going through the manuscript and making sure all the hes became shes and all the hims became hers but apparently a few were missed and ended up printed in the ARCs.  And yes, MANY people have contacted me asking me why Maxxer seems so terribly undecided about his/her gender.

It was pretty mortifying. But I’ll tell you. These kind of things happen. At least I ended up with a great story to tell!

The award for the “Character with the Most Unpronounceable Name” goes to...

Okay, so I know this name doesn’t look hard to pronounce and the truth is, it’s not…now. But when I first wrote the proposal for the trilogy, Rio, the scientist who Sera meets halfway through the book, was actually written as Ryo.

In my head, it was easy. I pronounced it like the Japanese would pronounce it. With kind of an L/R sound, rhyming with low. Like “yo” with a slight rolled “r” sound in front of it.” But yes, even as I type that, I realize that I can’t even explain how to pronounce it. And every time my agent or editor would talk about the character they would have some other crazy way of saying it. RI-YO, R-YO, Ry-o. I eventually couldn’t take it anymore. I thought about all the confused looks on the faces of readers and I cracked. I decided to change the name. I went with Rio. (Pronounced ree-o) Partly because I liked the sound of it and partly because I had just gotten back from an amazing trip to Rio to promote The Karma Club and was still enamored with the city.

Unfortunately I can’t tell you much about Rio’s character without spoiling a large chunk of the plot. Just know this. In addition to the award listed above, Rio would also win the award for “The Character Who Knows the ENTIRE Truth About Seraphina.” And he’s the only one who would even be nominated in this category. J

Thanks so much for stopping by! I hope you enjoy UNREMEMBERED! 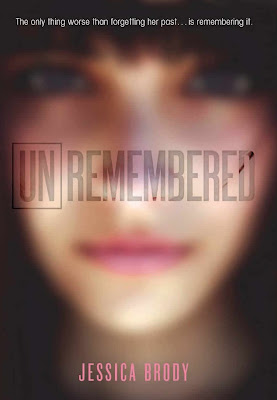 You can watch the Unremembered book trailer here:
http://www.youtube.com/watch?v=Jugd9FoFshc&feature=youtu.be

And you can follow her tour details here:
https://www.facebook.com/unrememberedtrilogy/events


Buy your own copy of Unremembered by Jessica Brody:
Book Depository - Amazon - Barnes and Noble
Posted by Carina Olsen at 6:00 AM