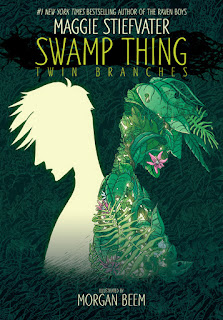 I have wanted to read this since it was announced. As I adore Maggie and her books. It seemed amazing. I, sadly, don't know anything about the original Swamp Thing, only heard the name and maybe seen a little bit of artwork. And I haven't read many graphic novels. Which I hope to change, as I did love this one.

Giving this gorgeous graphic novel four stars, as it was almost perfect to me. Very much enjoyed it. The writing was stunning, the artwork was beyond beautiful. Loved the coloring. Simply put, I very much liked this book. I only wish it had been longer. Or that there will be a sequel. That ending was depressing, ha.

I will not be writing much about this one, as there is not that much to say. It was fast and easy to read, which I loved. I very much enjoyed the characters, twin brothers Alec and Walker. This was most about Alec, but a little about Walker too. And though they were very different, I very much adored them both. They had always been close. Until now, when they are slowly falling apart. Which was sad to see a little about, but good too, because they somehow tried to work it out. At the very end. How rude. I very much adored these boys, though. They are spending their last summer before they start college with their cousins, as their parents have some huge issues to try to work through. If they can. Alec brings with him all his plants, all his work.

Which is then destroyed by dogs when they arrive. Which was heartbreaking to read about, for him to have all of his hard work destroyed. He tries to save it, which he is somewhat able to. Alec spends most of his time at a lab at the local school, working on his plants. I liked learning different things about plants. It was interesting. I also liked Alec. He was diabetic, which I thought was done really well. He was also fully shy and not good with people. He just found it hard. I so fully got that. I very much liked him, though.

He also meets a girl, Abby. And I very much liked her too. She was awesome. She was learning things about a big ancient tree that was in her town. I liked that too. They were getting to know each other. As this was a graphic novel, there is so much we do not get to know. Sigh. But I liked getting to know them even so. Walker was so different from his brother. He was the life of every party, always getting to know people, getting them to like him. The brothers loved each other, though. And I liked them both very much.

I just wish this graphic novel had been longer, haha. And it ended so rudely. But so good too. I just need more. And so much want to know what happens next. This book was about Alec and his plants, how he was working on some type of experiment. Which changes the dogs. And then changes Alec too. I wish there had been even more about it all. Was very interesting. Four stars, as I wanted more, and felt like scenes just suddenly ended, next page something new happened. It did this often. Still, I liked this a lot.

Swamp Thing was just as good as I had hoped it would be. The writing was stunning, the artwork was perfection. The characters were amazing. And I so badly wanted to know more. Sigh. Though I had a few issues, they were small, and I really did like this book. Now I am just hoping that there will be more of it. Though I guess I should try watching that Swamp Thing tv show, which I have been curious about. I think you should all read this awesome graphic novel. I found this to be well written and such a great story too.