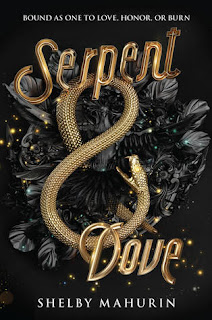 This book ended up being pretty much perfect for me. I enjoyed it so very much. I had hoped that I would love it and it makes me so happy that I did. A few small things bothered me, so it's a four star. But a good one. I could not stop reading this book. I needed to know what would happen next. I did not want this book to end.

There is much I could share about this story. Though my words seem to be failing me. Simply because I enjoyed this story very much. The writing was perfect. I had no trouble at all connecting to the characters and the story. I loved that. The setting was so interesting and good. I was curious about this world and its rules.

This book tells the story of Louise and Reid. Two very different people. Lou is a witch, having left her coven behind two years ago to live as a thief in the city. To protect herself from someone from her past that would hurt her. Reid is a witch hunter for the church. Grown up learning all witches are evil and must be killed. He grew up with the Archbishop as mentor. They both had such different lives. Both so interesting. And when they meet it was all kinds of awesome. They are different, but would be so well together. Sigh. Getting to know them both was all kinds of exciting. Lou had so much to tell. Her best friend, Coco, was pretty much adorable. I so loved that they were both witches. There was much to know about that. So much magic. And all was awesome.

There is so much going on in this book. Witches in this town are hunted down and burned. They are not all innocent, they have hurt a lot of people. But many were innocent too, and they did not deserve to get burned. There is a story about the witches having plans for the town and the people in it. Lou is a part of that. Though she does not want to be. And slowly learning to know all of the reasons for that was pretty great. This girl annoyed me at times. Yet I could not help but adore her. She was so fierce and awesome.

This is a story about a witch and a witch hunter slowly falling in love. Though he does not know she is a witch. And if he did, he would burn her at the stake. They meet with him hunting her, as she have been seen with a witch. The way he captures her is not good, as they have an audience. And because of this, the Archbishop decides that they have to be married right away. It was so awkward yet so awesome and I couldn't help but love it so much, haha. But oh, Lou treated Reid somewhat badly for a time. Sigh. Hmph.

But they got better together. They learned to know each other. Well, slowly. While Lou tried not to let Reid know who she truly was. She needed him to protect her. There is so much I could write about these two characters. There is so much happening in this book. It is long and pretty epic. But I will not share much more about them. Only that they had some of the most awesome scenes together. They live were Reid live, with all the other hunters. It was awkward yet somewhat fun at times too. Always interesting, though.

We get to know Lou and Reid the most in this story, as the book is told from their point of views. But there was also Coco. Whom I adored, most of the time, haha. I'm so curious about her and wish to get to know her more. Then there was Ansel, a younger boy training to be a witch hunter too. He was so sweet and awkward and I just adored him. There are witches to get to know. Most of them bad. But all of them was interesting to read about. This world was all kinds of amazing. And I loved all that was revealed about it.

This book is a four star for me for a few reasons. It was almost perfect. Such great writing that I loved at all times. Awesome characters that I adored. And such an exciting world and story that I loved getting to know more about. But it also had some drama that I did not like one bit. The girl is horrible to the boy for some time. It's supposed to seem like fun teasing, I suppose. But I didn't think so. It just hurt my heart. I got past this, but it was no fun, to be honest. I wish her sometimes cruel teasing had not been included.

One thing that bothered me a little about this book was how old the characters were. It seems they are supposed to be eighteen years old, both of them. Though it is never confirmed. They talk about this boy being sixteen like he is a child. Like they were sixteen themselves half a life ago. It was weird. This book also has a lot of cursing. Which I don't mind at all, though it was a little too much at times as well. Good too. And oh. There is a love scene. And it was so very perfectly written. Sigh. I loved that so very much.

I must say that I am so happy that I read Serpent & Dove. It was almost perfect to me. I enjoyed reading it a whole lot. Though I had not noticed that there would be second book, and now I'm so impatient to know what will happen next, haha. The ending is not really a cliffhanger, but it is filled with things revealed and bad things coming. I liked it a lot. This book hurt my heart a bit at times. But for the most part it was such a fun story and I adored these characters so much. It was such an adorable romance. I shipped them so.

There is still so much I have not shared about this book. But I have also shared too much, haha. It was such a great story. And you all need to read it when it comes out in September. I am going to need to own all the editions of this one. Big thank you to the publisher, HarperTeen, for the auto-approval on Edelweiss so that I could read this book early. I will be buying the hardcover of this one for sure. And hunting for the print ARC to add to my collection as well. This is a book that everyone should read. It was worth reading.