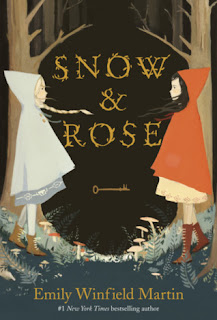 When I saw this gorgeous cover, I could not resist buying this book. I also adore reading middle grade stories, and fairy tales, so this one sounded amazing. And so I couldn't resist reading it when my hardcover has arrived. But oh, I'm so sad to say that I was disappointed. I thought it would be amazing. But it was not.

My biggest issue with this book was the writing. It all sort of felt awkward. I didn't enjoy it at all. I didn't connect with the story or the characters. To me, it was written in a weird way and I didn't like it. Which was depressing. Good writing is a must, and sadly this wasn't good at all. Also felt like it maybe tried a bit too hard.

If that makes any sense at all. It was written like it was telling a story, a story about Snow and Rose. It just wasn't written good. At least not for me. I'm positive that others will enjoy this writing, but I did not. And so I am giving this two stars. Because since I wasn't able to connect with the writing, I also didn't feel anything for the story. Though that was not the only reason for why I did not like this book. I felt like this story was too little, too childish and too boring. I adore middle grade books. But this felt like it was written for way younger kids, and not in a good way. Aw. Snow is nine years old, and Rose is eleven. They are sisters and live with their mother in the woods. Their father went missing some time ago, which meant they had to leave their nice house.

I'm not sure what to say about this book. It's pretty short, and fast to read. I sadly wasn't that interested in the story, so it was a bit boring for me. The book also takes place over a year, and with just about nothing happening. We learn a little bit about both girls, and they were pretty adorable to read about. Their mom is a bit distant, missing her husband. But because of the weird writing, I didn't get to know the girls nearly enough, and so I did not love them. They just spend their days in the forest, walking around all the time.

Which I must admit was all kinds of boring. Sigh. There are a few animals included in this book, but I also felt like that was a bit awkward too. Some parts of the book were interesting, as there was a curse in the woods. Kind of. But there was too little focus on it, so it grew boring again. There is also a big bear, which was kind of interesting, but also very unrealistic, so I did not enjoy that very much either. Rose and Snow becomes friends with a boy who also lives in the woods, Ivo. He was kind of cute. Too little of him as well.

There truly isn't much I can say about this book. Because there really wasn't much happening. I suppose that the plot is about people going missing in the woods, and the girls being able to save the forest. But it wasn't focused on at all, so it wasn't that great. And I thought the ending was way too good, way too easy. So yeah. I was just pretty much disappointed by Snow & Rose. I had hoped it would be much more, with how gorgeous it looks. At least there are pretty illustrations inside. Curious to know what others think of it.