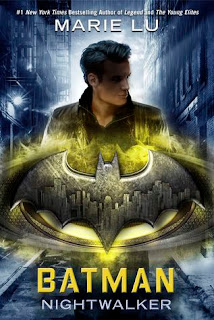 This book was pretty incredible. The writing was gorgeous and the story was exciting. The book is fast to read and sort of short, yet so interesting. I loved this modern story about eighteen year old Bruce Wayne aka Batman. I'm giving this precious book four stars, as I didn't fully love everything, yet still enjoyed it so much.

I'm not a big fan of Batman, as I haven't seen much of him. But I do enjoy the show Gotham. And this book reminded me a lot of that, although this was not incredibly dark like the show. Just felt that Bruce and Alfred was a bit similar, and I liked that lots. Think that this book made me like Batman a whole lot. So yay for that.

Batman: Nightwalker tells the story of Bruce Wayne, just turned eighteen years old. His parents were killed when he was eight years old, and he has been living with his butler turned guardian, Alfred, ever since then. I really liked getting to read about Bruce. He was fun to get to know. He's a kind and gentle person. He's full of money, of course. And he lives in a mansion. But he isn't horrible. I loved that about him. He has two best friends, Dianne and Harvey. And I adored those friends of his. Though the book is short, they both have their own story that is hinted at. And I loved getting to know them both a little bit. They were also such excellent friends, always, which was the best. I very much liked reading about a great friendship. Plus, adorable characters.

This book starts with Bruce not following police orders on the night of his birthday party, and ending up stopping a criminal with his car. Doing this makes him have to do community service, at Arkham Asylum for five weeks. He does a lot of cleaning there. And all the inmates yell ugly things at him, which was a bit disturbing. Though I wish that the things they said had been mentioned, as I felt like it should have been. But anyway. Reading about Bruce doing work at the Asylum was pretty great and horrible and interesting.

While he's there, he starts noticing a girl his own age that is in this prison for three murders. He can't help but wonder why, as she looks so innocent. She has been in this Asylum for four months, and she has not said a word to anyone in all that time. Until she starts talking to Bruce. I am unsure about how I felt about this girl. She was interesting to read about, sure, but she was also a killer, and Bruce started to feel things for her pretty fast. But did like that a bunch. And their talks were always fun and interesting to read about.

I'm not going to say much about this book, as it's pretty short, but it was such an exciting read. And I liked all the things that happened. Do wish there had been more about it all, though. Bruce is trying to help the police with talking to the criminal, Madeleine. There have been murders and money stolen. This book was very modern, and I liked that. It wasn't all that dark, so I wish it had been a bit more brutal. But it was dark enough, in a way. There are a few bad guys. And Bruce was such an amazing character. I loved him lots.

The only reason for why I didn't love this book was because I felt like not that much happened in it. The story was pretty short, and involved very little. But despite that, I liked this book oh so much and I really adored reading about Bruce. The ending was good, a bit bittersweet. But I do wish there had been more romance. Ack. And wish there would be a second book, because I do want more of these characters very much. I adore Marie. And I have enjoyed every book I have read by her so far. Cannot wait to read more.

Huge thank you to the lovely Penguin Random House International for sending me this ARC for review. Means the most to me. I'm thrilled to have been able to read and review this book early. And I can't wait to get the finished copies of it in early January. If you love Batman, or Marie, then you really need to get this book when it comes out. It's fast and fun and just really exciting. Batman: Nightwalker was a thrilling book to read. Bruce was amazing to read about, and the story was exciting. I liked it a bunch. As will you.