The Hunger Games: The Movies

These past few days I have been watching The Hunger Games movies. The first two was a rewatch, as I had only seen them both once before. And I finally watched the first Mockingjay movie as well before seeing number two in the cinema. I just wanted to share a little bit about my thoughts for these movies :) I wish to start by saying that I loved the books a lot. Like a lot, a lot. But it has also been way more than four years since I last read them, not since before I started blogging and using Goodreads. As I'm nervous about reading them again, because of my hatred of love triangles. Yet I'm so curious too. But even so, I remember a lot from these books. I have lots of thoughts about the movies. Will share a bit.


"You know, you could live a thousand lifetimes and not deserve him."

I'm not going to talk a lot about these movies. I just want to share a little. I thought the books were better. Yet I liked the movies a lot, more than the Divergent movie. Even though I liked that book more a while back. Hmm. I felt like The Hunger Games movies weren't done that well, yet they weren't that bad either. The only thing I don't like about these movies are the actors. I can't stand their versions of the characters. Sigh. And that makes me so sad. I wanted to love them all. But I can't stand the way they look, lol. Just. Josh as Peeta was such a bad choice. I just do not like the look of him, sadly. Peeta in my head is taller and cuter, lol. Though I didn't like the actors, I did feel like they did a good job.

I don't know how to describe what I feel about these movies. I didn't love them. But I liked them a lot. What they did, though, was make me want to re-read the books. Ahh. And I'm too nervous about that. But I will probably do it in a few weeks anyway, lol. Maybe. I'm not sure yet. I just really want to. Above you see a few quotes. They are my favorites ones from this series. Katniss will never deserve Peeta, at least in my eyes. She treated him so badly, and he loved her so much even so. It bothered me. That last quote always makes my heart happy, though. But hmm. The movies. It annoyed me that so much from the movie was taken away. Like many of the most brutal parts. The poor stylists that were locked up in Mockingjay. The big hole in the ground at the end of Mockingjay, all those dead people. And lots more.

But I did like these movies a lot. I just. I felt like so much weren't included. I didn't like how we didn't really see Johanna at all in Mockingjay Part 2. I hated that they cut away their weeks of training. I wanted to see that. I hated how Katniss ended up in the Capitol, because it didn't happen like that, and so, yeah, that bothered me. I hated how they never included Peeta's family in these movies. He was always alone. That wasn't true. He had a family. I mean, sure, they weren't the kindest, but they should have been included. Hmph. Anyway. I just wanted to share some of my thoughts about these movies :) I'm glad I saw them all. Though, lol, I watched them with my sister, and she said it ended differently than what she thought. She thought Katniss would choose the other boy. HAH. As if, lol. I would not have seen it if that was the case. Haha. Anyway. Have you seen these movies yet? Have you read the books? 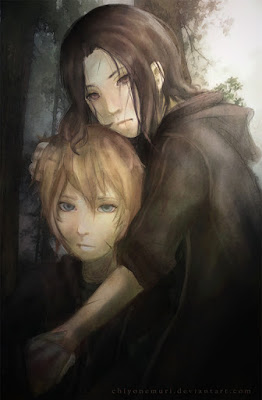 My favorite piece of The Hunger Games fan art.
Posted by Carina Olsen at 7:15 PM