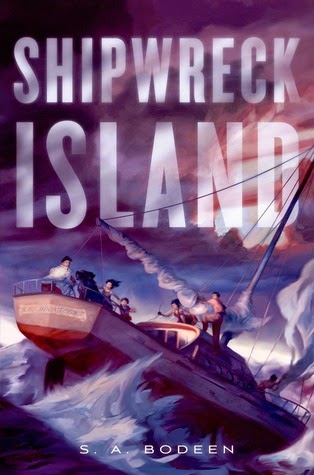 I wanted to read this book because of that gorgeous cover. It looks awesome. And then the summary. Though I was a little bit worried that I wouldn't like it. But I did. I liked it a lot. It is also a middle grade book, which is all kinds of awesome. The main character, Sarah, is twelve years old. And the other main character, her new stepbrother, Marco, who is also twelve.

This book truly isn't that long. Which I wish it had been. It was a very fast read. And I enjoyed reading it. Loved that it was told from the point of view of Sarah and Marco. Though I do wish we had gotten to know them both a little bit more. But I liked them. The plot in this book is that Sarah's dad just married Marco's mom. And now they all live together. Nacho as well.

We don't get to read all that much about it, which I'm a little bit sad about, because agh. I really enjoyed this book and I wanted to know more. I wanted it to be even longer. But I also liked that it was short. But yeah. There better be a second book, hih. <3 And it better be out pretty soon, as I do not like waiting, lol. But anyway. I felt with Sarah, who was not happy with the new wife. Sure, I wish she could have tried to make the best of it, but then. I probably wouldn't have been all that happy about it either, at that age. Marco isn't very happy either, since they had to leave their home and friends. Though his younger brother, Nacho, seemed more okay with it. He's adorable. I pretty much liked all the characters.

I don't want to say too much about this book, as it isn't that long yet a lot of things happen. But you know most of it from the summary. The family is going on a sail trip, and then they shipwreck. Which is pretty obvious from the title. I found all of that to be pretty awesome to read about, and also a little scary. I liked it. They wreck near this island and that is where it gets even more interesting. I'm not going to say more, just that I liked reading about the island. So creepy. And all kinds of awesome.

I'm giving this book a four star. I enjoyed it, but I didn't fully love it, as I had a few issues with the writing. And the length of the book. I wished it had been so much longer, as I'm really curious about what will happen next. And, you know, it ends with a cliffhanger. But I also really liked this book. I'm a bit surprised that I did. But I'm happy. I enjoyed it. It is also a bit creepy, which I enjoyed a lot. Not going to say more. Just, Shipwreck Island was an exciting middle grade book. It was fun to read. And I'm glad that I did. Huge thank you to Ksenia and Macmillan Kids for the print ARC of this gorgeous book. <3