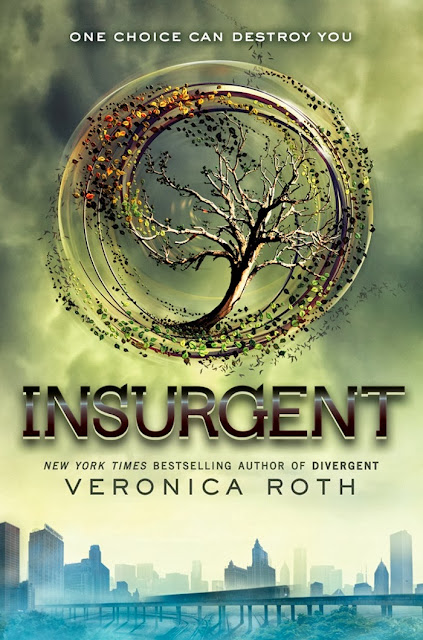 I don't know how to talk about Insurgent. I've actually only read it once, when it came out last year. Not sure why I didn't re-read it. Because I did love it. There were a few parts that I hated a little bit, but mostly I found it to be a great sequel. The writing in this book is good, and I liked it better than in Divergent. I enjoy the characters, though I had some issues with Tris. But I adore Four so much. He is amazing and it is mostly because of him that I love these books. That and the awesome story line :)

Insurgent starts where Divergent ends. With Tris and Four and a few other people heading for Amity to be safe. And oh, I'm not sure how I felt about it. I will never be able to fully trust Peter. Though I'm starting to like him a little bit better. But Marcus. I will never ever like him and I hated that Tris had to spend so much time with him. It was just.. evil, in a way. I'm not happy with it. Not after what he did to Tobias. For years. It was not fair at all. Sniffs. Anyway. I will never like those two. No matter what.

The book is told from the point of view of Tris again, and I liked that. Though I would have liked Four more. Who goes by the name Tobias, which I adore. But I will continue to refer to him as Four for the time being; as I adore both names. Anyway. Tris changes in this book. She changes after the death of her parents and after having had to kill Will. And I get that. Truly, I do. But seriously. That is no excuse to shut Four out like that. To not tell him things. To betray him. She had no reason to do that. Sobs.

I wish I could say I loved Tris in this book. But I did not. I enjoyed reading about her and I did mostly approve of some of the things that she did. If only she had included Four in those things. I would have liked her more if she hadn't been so cold. Sigh. Anyway. I did like her for the most part, I just didn't love her. Hoping that changes in Allegiant. Though it may not. Still. I love her and Four together. They are the perfect couple and I need her to see that as well. They fit together so well. They are adorable.

I'm not going to talk about the plot in this book. Because there is so much happening. We learn more about the simulations. I actually really loved reading about the fear landscapes in book one, but the simulations in this book were awful. They messed with my mind a bit. And I loved it. We learn more about Candor and Amity in this book. Candor sounds awful. I hated when they used the truth serum. Tris needed it. But Four did not. It broke my heart because it wasn't fair to him. Still, it was interesting.

There is so much in this book. A lot of deaths. A lot of heartbreak. Many tears. But there is also love and friendships. I still adore Christina. And Uriah. So many amazing characters to read about. Some I hate, but don't care too much about those. There are a lot of betrayals in Insurgent. Most of them broke my heart. I don't know what else to say about this book. There were moments I loved. Moments I hated. When Tris didn't trust Four. It was heartbreaking. But mostly I did love this book. It is awesome.

Though I didn't fully love Tris in this book, I adored Four. He keeps a few secrets himself, but they are not big one like those Tris keeps. He's still sweet and adorable and he loves Tris more than anything. He's protective and broken. I loved every part of him. Though I'm not sure I like him getting closer to this one person in this book. Hmm. But anyway. I loved re-reading this book and I'm hoping Allegiant will be just as good. <3 I think you all need to read these books right away. I do think they are worth it.