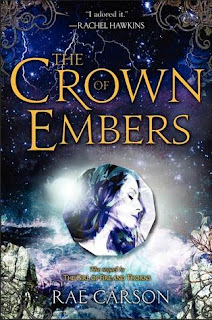 THE CROWN OF EMBERS (Fire and Thorns #2) BY RAE CARSON

In the sequel to the acclaimed The Girl of Fire and Thorns, a seventeen-year-old princess turned war queen faces sorcery, adventure, untold power, and romance as she fulfills her epic destiny.

Elisa is the hero of her country. She led her people to victory against a terrifying enemy, and now she is their queen. But she is only seventeen years old. Her rivals may have simply retreated, choosing stealth over battle. And no one within her court trusts her-except Hector, the commander of the royal guard, and her companions. As the country begins to crumble beneath her and her enemies emerge from the shadows, Elisa will take another journey. With a one-eyed warrior, a loyal friend, an enemy defector, and the man she is falling in love with, Elisa crosses the ocean in search of the perilous, uncharted, and mythical source of the Godstone's power. That is not all she finds. A breathtaking, romantic, and dangerous second volume in the Fire and Thorns trilogy.


Hardcover, 410 pages
Expected publication: September 18th 2012 by Greenwillow Books
Pre-Order here.
I did love The Girl of Fire and Thorns. I just didn't approve of the ending. And because of that I am a bit vary of this book. There is a certain thing I'm already disliking, but I did love the main character and I loved the world this book is set in. And because of that I am super excited about this book :D I need to know what will happen next. So I am looking forward to it. Also, stunning covers. :)
What are you waiting for?
Posted by Carina Olsen at 1:01 AM