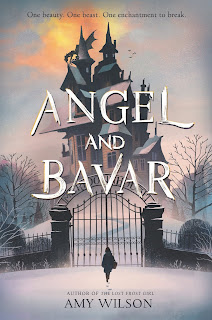 I wanted so badly to love this. Because that cover is completely stunning. And the summary was so good too. And so I could not resist getting this via Edelweiss. It is coming out this November, though it is already out in the UK, I found out. I could not resist reading this book so early. And it did not take me long to read it.

But oh, how I wish I could say that I loved this book. I wanted to, so badly. But I did not love it. Not even one bit. I'm even giving it two stars. Which is a bit heartbreaking for me. Was thinking three stars, but I did not like it that much, if I am going to be completely honest. This one was disappointing to me. For so many reasons.

I shall begin with the writing. It bothered me at all times. It simply was not very good. And I could not connect with the story or the characters at all. Everything just felt silly. It did not feel real, not one bit. I have a weird relationship with writing in books. And if I do not like a writing, it makes it pretty much impossible to like the rest of the book. Which was the case with this one. The writing was not good. But it wasn't completely terrible either. Sadly the rest of the book was not better. I did not really care for Angel and Bavar at all. I didn't love their new and growing friendship at all. It even annoyed me. Which I do not approve of it at all. Hmph. My review is not going to be very long, because this book was pretty short, and I do not have that much to say about it all.

This book tells the story of Angel and Bavar. She is twelve years old, and he is thirteen. She just moved to his town, as her parents were killed about a year back, in a pretty bad way. She now lives with foster parents. And reading about that was pretty interesting. I did like Angel. But was just a bit upset with her sometimes too. But learning about her past was interesting too. And I liked the foster parents that she was living with. They seemed pretty nice. My heart broke for her at times too, because of her parents.

Then there was Bavar. I somewhat loved this boy. He was pretty broken and sad. But also not enough broken. Ack. If only it had been written better. Sigh. But yeah. This boy had his parents leave him a year ago, and so now he lives with his aunt and uncle. In a big magical house. Where he must fight monsters. It's a little complicated. Yet not nearly enough so. Aw. But anyway. I liked reading about Bavar. He was interesting. But, uhm, he is described as being really, really tall, and that was a bit confusing, honestly.

This book is about Angel and Bavar meeting, and learning each others secrets. Her figuring out about his magic, and how she can learn the truth about how her parents died. And then it is about them trying to figure out how to get rid of all of the monsters. I wish I could say that it was exciting to read about. But it was not, sadly. I just wanted this book to end. Ack. I didn't love the characters. I did not care much for the story, because not that much happened. Honestly, I wanted this book to be so much bigger than it was.

I cannot help but share that I was completely disappointed by the friendship in this book. I was hoping it would be huge and sweet and just the very best. It was not. I never felt like Angel was spending time with Bavar because she liked him. It was more that she liked his magic, and wanted to learn more about how her parents had died. And she was even mean towards him at times, for nothing that he had done. I was not pleased. This friendship was not epic, like I wanted it to be. It was mostly good, but nothing special.

Which just disappointed me so much. Aw. Then there was the magic in this book. There was not a lot of it at all. There are some mentions of monsters, but only one kind, something with wings. And there are a few scenes with Bavar fighting them. And it just felt a bit weird, to be honest. And the ending felt pretty rushed, I think. This whole book could have been so much more. And I just feel sad because it was not. Maybe it is just me. Shrugs. I do not know. But I do know that I did not love this book. It was not for me.

Angel and Bavar was not the book I wanted it to be. I was expecting a much more stunning friendship. More magic. More story. More broken characters. I feel pretty let down about it, to be honest. But I will also say that the book was not all bad. I did like Bavar a bunch. I just did not love him. And I liked reading about Bavar and Angel spending time together, sometimes. I liked their small families. I enjoyed reading about this magic house and the talking portraits and all that. Just wish that there had been more of it all.

Huge thank you to the publisher, Katherine Tegen Books, for the auto approval on Edelweiss that made me able to read and review this book early. Despite my disappointed feelings for this book, I am glad that I gave it a try. Because otherwise I would have been curious about it all the time. I wish it had been better, though, so I'm a bit sad about that. Aw. I think there are people that will love Angel and Bavar. I was sadly just not one of those people. Still, though. This is one of the most gorgeous covers I have seen. I love it.