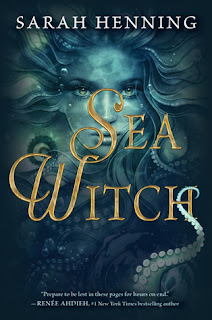 Everyone knows what happens in the end.
A mermaid, a prince, a true love’s kiss.
But before that young siren’s tale, there were three friends.
One feared, one royal, and one already dead.

Ever since her best friend, Anna, drowned, Evie has been an outcast in her small fishing town. A freak. A curse. A witch.

A girl with an uncanny resemblance to Anna appears offshore and, though the girl denies it, Evie is convinced that her best friend actually survived. That her own magic wasn’t so powerless after all. And, as the two girls catch the eyes—and hearts—of two charming princes, Evie believes that she might finally have a chance at her own happily ever after.

But her new friend has secrets of her own. She can’t stay in Havnestad, or on two legs, unless Evie finds a way to help her. Now Evie will do anything to save her friend’s humanity, along with her prince’s heart—harnessing the power of her magic, her ocean, and her love until she discovers, too late, the truth of her bargain.

The rise of Hans Christian Andersen’s iconic villainess is a heart-wrenching story of friendship, betrayal, and a girl pushed beyond her limits—to become a monster.

I'm still so unsure if I'm going to read this book or not. Ahhh. That cover is killing me with beauty. I want it. I want to read it so badly, but at the same time, I do not, lol. Because I need my happy endings so much. And I'm pretty sure this one does not have one? Ahh. Yet it sounds like such a perfect book. Ugh. And I am so curious about it. Hmph. I can auto-download it on Edelweiss, just need to be brave enough, lol :)
What are you waiting for on this cursed Wednesday?
Posted by Carina Olsen at 6:00 AM