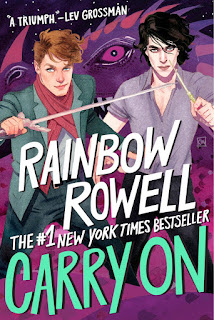 CARRY ON BY RAINBOW ROWELL

Simon Snow is the worst chosen one who's ever been chosen

That's what his roommate, Baz, says. And Baz might be evil and a vampire and a complete git, but he's probably right.

Half the time Simon can't even make his wand work, and the other half, he sets something on fire. His mentor's avoiding him, his girlfriend broke up with him, and there's a magic-eating monster running around wearing Simon's face. Baz would be having a field day with all this, if he were here - it's their last year at Watford School of Magicks, and Simon's infuriating nemesis didn't even bother to show up.

Carry On is a love letter to love stories and the power of words - to every 'chosen one' who ever had more on their mind than saving the world...

I know, I know :D I have already read this precious, last year, eee. <3 Buuut. There is a new paperback cover coming in May. And I am DYING to own it. And so that counts for this post :) Because daaamn. That cover is gorgeous. Sigh. So pretty. I love it :D I cannot wait to own two copies of this one. <3 Eee. I'm unsure why I still haven't re-read this book yet. Only read it once, over a year ago. And I simply loved it beyond words. Yet I never have time lately. Sigh. But I will re-read soon :D Just, oh. How I adore Simon and Baz. They are amazing. I just really, really want a sequel. <3 Fingers crossed. Have you read it yet?
What are you waiting for on this magic Wednesday?
Posted by Carina Olsen at 6:00 AM