Review: The Last Good Day of the Year by Jessica Warman 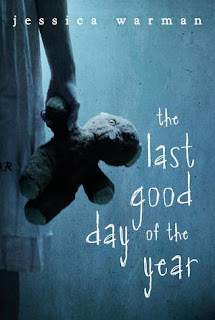 I have been meaning to read this book for a few months now, ever since Bloomsbury was so kind to accept my request to review it on Netgalley. But then I peeked at the book. And I saw some bad things about the romance. So I put it off. And then my hardcover arrived. I put it off. But now I wanted to try it.

And I'm so pleased that I did. Because I ended up really liking this book. It was a fast read. The writing is pretty awesome. A few things bothered me, but I really liked the story a whole lot. Which is why I'm giving this book four stars. It wasn't perfect, but it was pretty amazing and I found it to be an exciting book.

I wanted to read The Last Good Day of the Year because I found the cover to be creepy. And I loved the summary. I do like stories like this one, though they are all kinds of sad and heartbreaking. But then, like I said, I peeked. And I worried that the romance would make me hate the book. But now I finally wanted to give it a try. And I'm so thrilled that I did. It was a lot more awesome than I thought it would be. The writing is stunning. It annoyed me a few times, and I saw a few things that were wrong, but it didn't bother me that much. For the most part it was awesome. I didn't approve of the romance, but it is not a big part.

I'm not going to write such a long review for this book. Because it is short; less than three hundred pages. And there isn't that much happening. And I don't want to spoil anything. Though I will talk about this one thing that bothered me a bit, that is a big spoiling. But nothing too big. Anyway. I'm just so glad that I read this book. Though the writing was a bit weird, with Samantha sort of telling a story about things that have happened in the past and now in the present. It was weird, but I grew to like it a lot.

I will not share much about what this book is about. But it is about Samantha and her family, trying to deal with her little sister getting kidnapped ten years ago. She has not been found. A man was put in jail for kidnapping her, but he claims he didn't do it. It happened when Turtle was four years old, and Sam and Remy was seven. I loved reading about it. It was heartbreaking. And scary. And I loved it oh so much. It was exciting. Though not that exciting, as it was a bit slowly written, but still amazing to read.

Samantha is telling about so many things that has happened. A lot of things that happened before Turtle was taken, and the day she was taken, and the days after. Sam also has another sister that is ten years older than her. I loved reading about her. Though I hated how much her own parents hate her. It broke my heart. I just wish this book had been longer, because I wanted to know more. I need to know more about everything and everyone. And ugh, I really wish this book had not ended. I wasn't done reading it.

This book is exciting yet slow. I loved trying to figure out who took Turtle. How it happened. Though I was a bit disappointed, as I wanted her body to be found. It hasn't been. It hurts. But I loved knowing who did it. Though the punishment was not nearly enough. It made me a bit angry. Sigh. Yet it was written pretty awesome, even so. And this is all I'm going to say about the plot. It is heartbreaking. And awesome. And I liked reading it a whole lot. I'm so happy that I liked this book so much. It was great.

Then there is that romance thingy I didn't like. Sam used to be best friends with Remy. Then she moved away. Now, ten years later, he has a girlfriend. Sam has no one, though she had a sort of ex. I can't figure out if she had sex with him or not. It bothered me not knowing, lol. Then Remy breaks up with his girl. And he and Sam starts kissing and such. Wishing the romance had been more focused. It is so little. And I wanted a bit more friendship after those ten years. Sigh. Yet I still pretty much adored it.

But there was that other boy. Ugh. Noah, that Sam had been with months before. She met him once more, after she started seeing Remy. And she was attracted to Noah. And she kissed him, once, short. But yeah. It bothered me a lot. Sigh. But what bothered me the most is that that was the last we saw of the romance. What happened next? Did she ever see Noah again? Is she together with Remy or not? I wanted to know, and I'm a bit pissed that I did not get to know for sure, hah. But not too bothered :)

Anyway. I just wanted to share some of my thoughts about this book. I thought that The Last Good Day of the Year was a stunning book. It was exciting and heartbreaking and I loved reading every moment of it. I only wish it had been longer. It was so real and evil and sad and I loved it oh so much. Thank you so much to Bloomsbury for letting me read this book via Netgalley. <3 So sorry for taking this long to read it. I read my gorgeous hardcover. And I'm so glad I finally did so. I think you should all read this one.