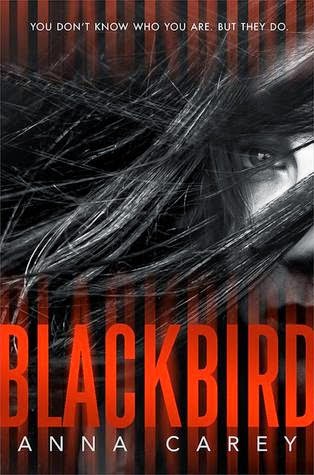 I wanted to read Blackbird because I thought it sounded awesome. And I was sure I would like it. Which I did. But I also didn't love it. I'm giving it a three star. Because I really liked the plot, but I had some huge issues. Agh. Will try my best to explain it all. Will include spoilers later, but will let you know when it starts and ends. Won't be huge spoilers, though :D

This book is about a girl waking up with no memory of who she is. Where she's from. All she seems to know is that someone is looking for her. And I loved that. It is an excellent plot. It is was exciting and a bit scary. I liked it. And I liked reading about her. She's awesome. I am curious about the tattoo on her wrist.

I liked the mystery in this book. It was very exciting. I needed to know about her past. Who she is. Where she came from. Who these men are who's after her. I did enjoy this book a lot. But didn't enjoy what I will mention below. Sigh. Sad face. But anyway. The girl remembers nothing. But she starts to remember a few things. Not much. Not much at all. But there is a boy she remembers. And I want to know more about him. Much more. But then there is this real boy in her life now. Ben. I liked him. But I.. well, I peeked at ending. And that's it. I won't say more about it :D Just that I need book two now, please. I need to know what happens next. Sniffs. Pretty please. Anyway. The ending in this book. I really loved it. But I felt like the book should have started that way. Hm.

Then there is the writing. I don't think I have read a book written like this before. I thought it might bother me, but it didn't. I liked the writing a lot in Blackbird. It was pretty awesome. And the characters. Sigh. Okay, there aren't that many characters. But I loved getting to know them a little. Mostly I liked the mystery about the Island that is mentioned by someone. I need to know more about it. And agh. I just wish the whole book had been about that. Makes me a little bit sad that it wasn't, lol.

This is where the SPOILERS start. I didn't want to discuss this, as it is so long until the book is out. But I can't no mention it. Because it bothered me so much. And it's the reason for why this is a three star and not a five star. The romance. Main girl don't remember her life, as I said, so she has no problem with getting together with Ben. Like really together. Which I normally would have liked. Except. She's remembering another boy. On the Island. Whom she loved. And it feels like a triangle. And I can't deal.

This is probably my fault, though. I peeked at the ending before I started. I knew the big twist. So I kind of ruined it for myself, lol. But I don't mind. Because I still enjoyed the book a lot. And I was still surprised. But I couldn't approve of her very-close-relationship with Ben. Especially with that ending. Something will happen in book two. About the boy she remembers. It isn't fair to me that she has sort of been cheating on him. Sleeping with someone else. Okay, fine, she doesn't remember him. But still.

Anyway. I just can't deal with that. It breaks my heart in all the places. It probably won't bother anyone else. Because I did like Ben. And the romance thingy between him and the girl is pretty sweet. But I couldn't like it. Not when she was remembering loving another boy. But she never think about it. She never seem to not want to be with Ben, despite remembering someone else. Agh. But then, the book takes place in less than a week, lol. Sigh. I am just worried about the sequel. SPOILERS OVER.

A big issue for me with this book was how short it was. It was an easy read. Which I enjoyed. But it ended way too fast. To me, this felt like a preview of the real book. If that makes sense. I wanted to read about them being on the Island. I wanted to read about that. So bad. And I'm a bit upset this book wasn't about the Island. Because that. That I want more than anything. Sounds exciting and terrifying and just perfect. Fingers crossed for the sequel, though. But agh. I must wait so long for it. Sigh.

Huge thank you to HarperTeen for the auto-approval on Edelweiss; so that I was able to read and review Blackbird early. <3 I'm so glad I read it. Despite having a few issues, lol. But anyway. The book isn't out until September. So long away! I will for sure be pre-ordering it as well. But yes. I think you guys should too. Because despite my few issues, I did think this was an exciting book. And I want you all to read it. So that I can discuss it even more, lol :D Now I just need the sequel. Right away, please. I need it.