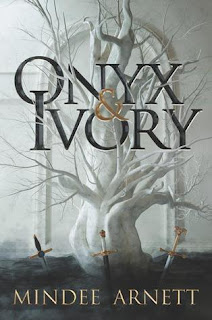 This book was all kinds of amazing, just as I had hoped it would be. The writing was gorgeous, and easy to get lost in this story. The characters were all awesome to read about and get to know. And I very much enjoyed reading about this stunning world that Mindee created. It was a bit scary yet all kinds of awesome too.

I'm giving this book four stars, because while most of was pretty perfect and fun, there was a few small things that made my heart hurt a little. Ack. But I found this book so be awesome. And I am dying to read the second book in this duology. It's going to be so good. As there really was a lot to love in this book. I liked it a lot.

This book is told from the point of view of Kate and Corwin. She is nineteen, he is twenty. They used to be the best of friends their whole childhood, until three years ago. When Kate's father tried to kill Corwin's father, the King. Kate's father ended up killed, and Kate has to leave, now called Traitor Kate by everyone. And her starting love with Corwin ruined now too. They haven't seen each other for the past three years, but that is changing. And oh, how I very much enjoyed this plot. So much happens, and this world was so awesome too. I am not sure where to begin talking about this book. As I liked it very much, and that means I'm having issues already figuring out what to say about it. But going to try my very best. I will not be including any spoilers about this book.

I really liked the characters in this book. It's told from two point of views, and they were both so awesome to read about. I think that I loved Corwin a tiny bit more. But Kate was amazing too. And I adored reading about the two of them being together. Corwin is a prince, second son of the current king. In this kingdom, something magical decides who will be the next in line to be king. Corwin doesn't really want this at all in the beginning of the book, but it has yet to be decided if he or his older brother will be the new high king.

And I really enjoyed reading about that, how the next king is chosen and such. It was interesting. But oh, Corwin. This boy was all kinds of adorable. I loved getting to know him. He is brave and kind and pretty awesome. I loved his friendship with Dal, whom was also all kinds of great. There was a lot to know about Corwin, and I loved getting to know it. I know that Kate is angry with him, but to me, she was overreacting a bit. I did not think Corwin was at fault for what happened. But anyway. I adored this boy a whole bunch.

And Kate was pretty amazing too. Fierce and brave and mostly loving too. I adored her two friends as well, especially Signe. She was awesome. And getting to know Kate was the best. I hated reading about so many things that she had to go through. Broke my heart a little. Yet I loved it too, because it made her stronger. I felt that maybe she was a bit too angry at certain times, though she did have her reasons most of the time. Kate also has a secret, to do with magic, and I loved that so very much. It was truly awesome.

I must admit to loving the beginning of this book the most. Ack. Though all of it were awesome. But oh, that beginning, when Kate and Corwin meet again. There is a lot of action, because this world is not a safe one. There are monsters out every night. And they were all kinds of creepy. And I couldn't help but love them the very most, lol. Awesome creatures are the best thing. And these were pretty horrible and created a lot of death. I loved it. And can't help but wish there will be more creatures to come in book two.

I'm not going to share much more about the plot of this book. Because there is a lot. And it's a long book. Which was awesome. I would say that a lot of the book is about Kate and Corwin finding their way back to each other, back to being friends again, after all those years of being apart. There isn't all that much romance, sadly, but I shipped them so much. And there is no love triangle. At all. And that was the very best thing. There is a bit of drama, though, but nothing too big. And I do have hope they will be together.

I cannot help but share the reasons for why this book is a four star for me. And it is mostly for personal reasons, and nothing I think that most others will even notice. But I did, because it have bothered me a little before too, in other books. Kate spends the most of this book being angry with Corwin, because he did not save her father from being executed. And I felt like she was being completely unfair about this. He is not king. Not even close. He couldn't have decided the fate of her father. Hmph. That part bothered me.

And that is a reason for why I'm feeling a little upset with Kate. Because she got angry with Corwin so much in this book. And it kept happening a lot of times. And while I did like reading about them arguing, as it was pretty cute, I did not like feeling that she was angry at him for no good reason. Probably just me that feels this way, though. But yeah. I didn't like how she was angry with him so often. He didn't deserve that, to be honest. But even so. Despite all of this, I still loved Kate a whole lot. She was pretty awesome.

I found Onyx & Ivory to be such an amazing book. The world was all kinds of fun, scary and just so good. The characters were fierce and lovely to read about. And I simply can't wait to read more about Kate and Corwin. And also, this cover is all kinds of gorgeous. If you haven't already ordered this book, then get on it. It is out in May, and it is very much worth reading. A bit long, yet could have been even longer. I had a few small issues, but mostly loved this story and characters a whole lot. So glad that I read this book now.